Karolina Pliskova suffered a shock loss in the second round of the Italian Open as she was beaten 3-6 6-3 7-5 by World No.42 Maria Sakkari.

The World No.5 was in excellent form coming into the match. She won the Stuttgart title and reached the semi-final in Madrid. She also made it to the semi-final in Brisbane and four other quarter-finals earlier in the year.

However, the Czech failed to live up to her billing in Rome. She took the opening set 6-3 but struggled to impose her game on Sakkari in the rest of the match.

The Greek, 22, fought back and took the match all the way to 5-all and deuce in the decider. At that point, Pliskova put away a smash which clearly hit the line.

Unfortunately for the Czech, the line judge called it out and the umpire refused to overrule the call. Pliskova argued, became understandably distracted and eventually lost her serve to fall 6-5 behind.

After Sakkari held serve comfortably to clinch the biggest win of her career, Pliskova’s rage boiled over. She shook hands with her blameless opponent and then hacked a chunk out of the umpire’s chair with her racket after refusing to shake her hand.

It was a sad end to an enthralling encounter, and the World No.5 will almost certainly face some kind of disciplinary action for the incident. However, it would never have happened if the court had hawk-eye.

Despite the disappointing finale, Sakkari will be delighted with her first-ever win over a player in the world’s top five.

The Greek had looked in danger of being blown away when she went 5-1 down in the opener. But she rallied to get one break back before the set was over and then used that momentum to turn the match around.

During her comeback, Sakkari broke Pliskova five times, which is an impressive feat considering the Czech is one of the best servers on the WTA tour.

The World No.42 can now look forward to a last-16 clash with either Angelique Kerber or Irina-Camelia Begu.

While Pliskova had a horrible time, Simona Halep’s match could hardly have gone any better. She saved four break points in her opening service game and then stepped up to produce a near-perfect clay-court performance against Naomi Osaka.

The World No.1 was thrashed 6-3 6-0 by the Japanese at the semi-final stage in Indian Wells, but this time it was her turn to dish out the punishment.

The Romanian showed exactly why she is the best WTA performer on clay with a breathtaking display of footwork and shot-making as she hammered Osaka 6-1 6-0. 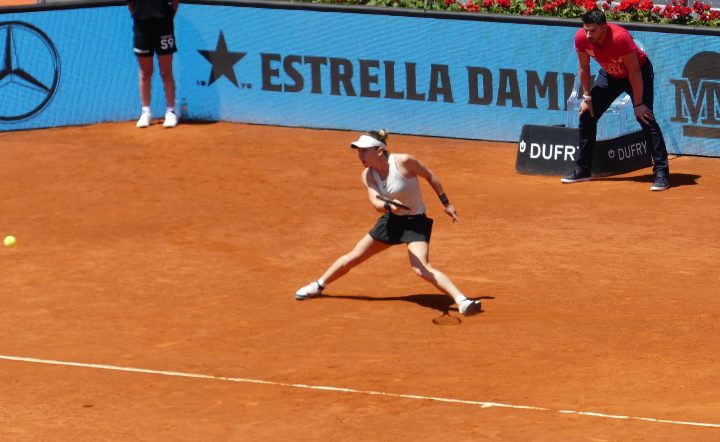 “In Melbourne I played against (Osaka), and it was also a very good match for me,” said Halep in her press conference.

“Then in Indian Wells, I don’t know what happened in that match. I couldn’t play my best tennis, and she played with confidence there.”

“I was just motivated (today), remembering that match. And I was focused that I have to play as I planned before. And it was a good tactic.”

Halep’s next challenge could be an intriguing one against Madison Keys after the American came through a tight encounter with in-form Donna Vekic 7-6(4) 7-6(0).

The World No.14 reached the Rome final in 2016 and has the power to hit through the Romanian, but she will need to be at her very best to stand a chance if Halep plays like she did against Osaka.