Elina Svitolina claimed the Italian Open trophy for the second successive year with a resounding 6-0 6-4 victory over World No.1 Simona Halep.

It is the Ukrainian’s second successful title defence of 2018 after she beat Kasatkina 6-4 6-0 to win in Dubai in February. It is also her 12th WTA title overall and she looks to be in excellent shape for the upcoming French Open.

“It’s amazing that I could come and defend my title here,” said Svitolina. “It’s really something very, very special for me.”

Svitolina and Halep met in the Rome final last year and, while the Ukrainian also won on that occasion, it was a very different match as the Romanian struggled with an ankle injury after a fall in the first set.

In the 2017 final, Halep won the first set 6-4. This time, however, she made a terrible start. She dropped serve in the opening game and made 11 unforced errors as she went on to lose the first set in just 20 minutes.

Although the World No.1 improved in the second set, Svitolina gave her no encouragement whatsoever. The Ukrainian chased every ball down and made Halep work for every point she won. 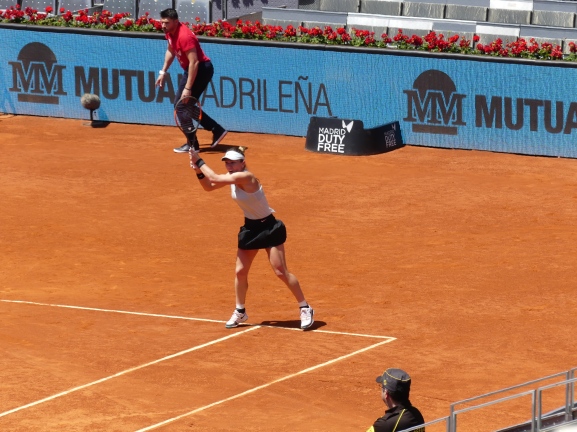 The World No.4 was rewarded for her relentlessness in game three. After she ran all around the court to win a crucial point with the score at deuce, she jumped around in delight. Seconds later, she sealed the break.

Svitolina had three more break points in game seven. Had she taken any of them, the contest would have been virtually over. But Halep clung on and eventually forced the Ukrainian to serve it out at 5-4.

The World No.4 did exactly that. She served well and earned two match points. The first passed her by as she made an unforced error, but she took the second when Halep netted a backhand.

When the interviewer suggested to Svitolina that we might see a rematch of Rome in the final at Roland Garros, the Ukrainian replied, “It’s still so, so far and I try to take one match at a time.”

“It’s very important (to think like this). Grand Slams are very tricky so we’ll see how it goes. But definitely I’m going to enjoy Roland Garros on a high note.”