If you look beyond Johanna Konta, Heather Watson and Naomi Broady in the British tennis landscape, then you will see a new star rising: Katie Boulter.

The young Brit, 21, is enjoying the best year of her career. She qualified for the Premier Mandatory event in Miami and then won ITF titles in April and May, which ensured she felt confident about her game going into the grass court season.

Boulter kicked on even more at her first grass event at Surbiton. She beat Asia Muhammed in three sets despite not being, in her own words, “quite as good” as she can be. Then she stepped up several gears to take down the 5th seed, Jana Fett, in two hard-fought sets.

Although she lost a very winnable encounter with Priscilla Hon in the last eight, it was nevertheless the kind of run that gets a player noticed. The tournament organisers at Nottingham were impressed and awarded the Brit a wild card.

Boulter repaid their faith with a pair of excellent victories to reach her first-ever WTA quarter-final. She beat World No.100 Yanina Wickmayer 6-4 6-4 in round one and followed it up with an even bigger scalp as she defeated 2011 US Open champion Sam Stosur 7-6(6) 6-1 in the last 16.

Unsurprisingly, World No.17 Ashleigh Barty proved much too strong for the Brit in the last eight, but Boulter should be very proud of what she has already achieved in 2018. Since 18 March, she has risen 70 places in the world rankings to a career-high of 138.

The Leicester girl’s performances have brought another reward: a wildcard for the WTA Premier event in Birmingham. It promises to be a fantastic learning experience for Boulter, as she will join Garbine Muguruza, Elina Svitolina and Petra Kvitova in Sunday’s draw.

How high can Boulter rise?

After she beat Fett at Surbiton, Boulter said, “I’ve been on the tour now a good solid year so I’ve played a lot of players like that and I’m starting to believe that I can be one of them.”

At the time, the Croatian was ranked 109, so the Brit clearly has her sights on the Top 100. However, there is no reason she cannot go higher than that – perhaps as high as the Top 50. She possesses a potent serve, strong groundstrokes on both sides and decent touch around the net. 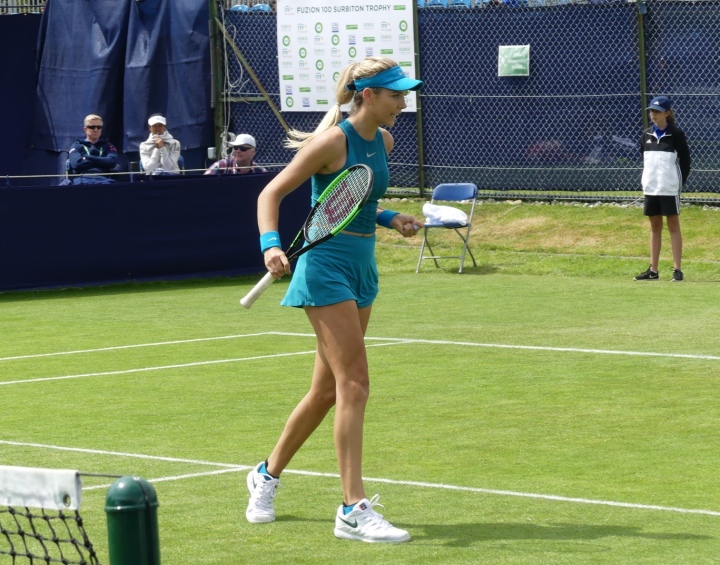 Boulter also has a kind of steely aggression about her game that tends to emerge when she needs it the most. Encouragingly, she realises how important it is to develop this.

She said, “Going forward, I think the biggest thing I need to do is play well at key points and I’m really starting to find a way to do that at these events.”

Boulter’s ever-improving mentality and growing self-belief will help her in Birmingham, where she is certainly capable of causing problems for the star players in that field, particularly if she gets a favourable first-round draw.

Those qualities will also help the 21-year-old if, as expected, she is given a wildcard into the main draw at Wimbledon for the second year running.