It was a wonderful week for the Great Britain Fed Cup team at the University of Bath, and two women – Johanna Konta and Katie Boulter – were the main reasons for that.

They had different but equally important roles in each tie. Boulter’s task was to give the team an immediate lead every day by beating the No.2 singles players of each nation. Konta then had to go out and beat the opponent’s No.1.

Both women did their jobs superbly. They drew on all of their unique qualities to succeed and, if Britain are going to win their World Group II Play-Off on April 20-21, they will probably have to perform even better. This is why each player succeeded: 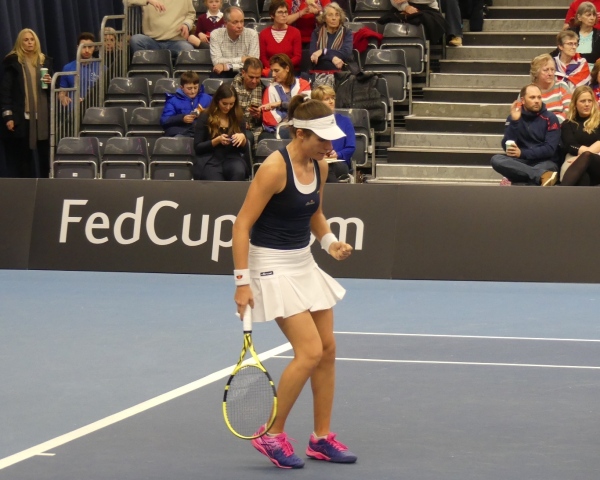 Every time it looked like Konta was in trouble in Bath, she found a way to get out of it. It did not matter if she was not playing particularly well, or even if she was feeling ill. Whatever the circumstances, she was determined to win for Great Britain.

This kind of never-say-die attitude is priceless for any team. As Captain, Anne Keothavong will know that even if Konta loses, she has given everything for the cause because that is what she always does.

Every one of these clashes had difficult elements for the Brit. To overcome Jakupovic, she had to come through a marathon 80-minute first set. To get the better of Sakkari, the highest-ranked opponent she faced, she had to fight back from a set down. To beat Bondar, she had to withstand a full-on assault of massive hitting. And to win against Krunic, she had to deal with dizziness in the deciding set.

By anyone’s standards that ranks as a very difficult four days, and Konta deserves plenty of admiration for the way she negotiated all of it successfully.

However, while these hard-fought victories were undeniably impressive, Britain’s No.1 may need to produce a higher standard of overall play to help her team win again in April’s play-off. 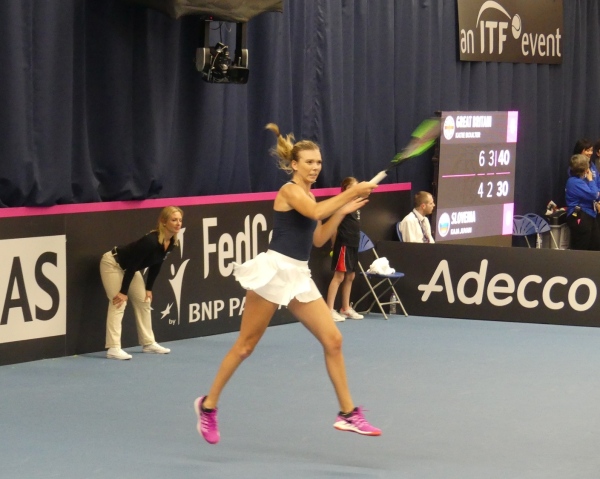 While Konta may not be quite at the peak of her powers, Katie Boulter most certainly is. And the really exciting thing is that she can still get a lot better.

At times in Bath, Boulter’s tennis was irresistible as she played a succession of brilliant points or games. She also started well in all of her matches, which is why she won the first set every time she played.

The British No.2 is an exciting player to watch, and she demonstrated all of her skills during the week. She served superbly at times, hit a slew of dazzling forehands and produced plenty of good backhands too. She also stepped into the court to finish points on numerous occasions and is clearly confident around the net.

However, Boulter’s biggest challenge going forward will be learning how to maintain a high level of play throughout a match. Her second match against Valentini Grammatikopoulou is a prime example. She was excellent in the first set and looked to be in total control.

But then she played a very poor game early in the second set and lost her serve to love. This gave the Greek confidence, and she played a lot better for the rest of the match. However, if Boulter had never faltered, this may never have happened and the Brit may have won in straight sets.

It happened again when the World No.83 took on Dalma Galfi. The Brit won the first set and then dropped serve early in the second set.

To Boulter’s credit, she did not suffer as much of a dip in performance as she did against Grammatikopoulou, and she only lost the second set because Galfi played so well.

In her final match of the week against Ivana Jorovic, there was real evidence of greater consistency in Boulter’s play. She won a topsy-turvy first set 6-4 and then kept the pressure on the Serb in the second set. That is why she won in straight sets and, if she can do that more often, she will win a higher percentage of her matches in the future.